Jennifer is starring alongside Bradley Cooper and Christian Bale in the new David O Russell film "Abscam" (not yet titled). She was seen in Boston, MA this week with a very retro hairstyle! Jennifer plays the role of Marie Weinberg in a 70s CIA thriller. Due for release December 25th. 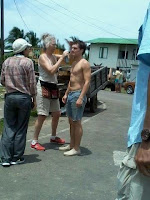 Josh is in Panama shooting a new movie with Benicio Del Toro titled "Paradise
Lost". It tells the story of Nick, an Irish surfer (Josh) who falls in love the drug czar Pablo Escobar's niece. This movie does not yet have a release date.

We can't wait to see these 2 movies!