Posted by Admin on Tuesday, May 14, 2013
UPDATE: A "beach-blowout" party is reported to be taking place TODAY (May 18th), with Jennifer Lawrence and Liam Hemsworth expected to attend.

RopeOfSilicon have posted new photos and a video from the Catching Fire advertising outside the Majestic hotel in Cannes. Check it out here.

Lionsgate are celebrating their new cosmetics partnership with CoverGirl for Catching Fire at the event. There are no confirmed reports of any new footage/pictures appearing, but there are strong rumours! Stay tuned..

Details are emerging about the Lionsgate and Catching Fire presence at this year's Cannes Film Festival. Apparently, some new footage from the film will be shown at some point during the festival as part of Lionsgate's bid to sell Mockingjay pt. 1 + 2 to international distributors.

There was a previous rumour from ShowBiz411 about a possible Catching Fire appearance at the festival. Now it seems to be true.

The picture below shows a fantastic motion poster in Cannes for Catching Fire! As I'm sure you'll agree, it looks stunning: (for a look at the poster in action, click here.) 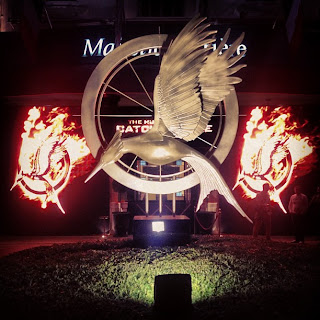 The festival will run from tomorrow (May 15th) through to May 26th. Let's hope there'll be something new and exciting. (fingers-crossed it will be posted online as well!)