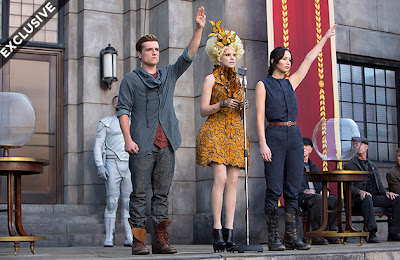 Yahoo! Movies have provided us with all the details, plus a brand new still featuring Katniss, Peeta and Effie! It appears to be the Quarter Quell reaping in District 12...

And here is the all important information - the trailer will be posted online as soon as it's shown at Comic-Con!: "Immediately after the 1:35 p.m. PT debut of the new full-length trailer in Hall H, you'll be able to log onto movies.yahoo.com and watch in to your heart's content."

The full-length trailer for Catching Fire will be shown on Saturday 20th July in Hall H at SDCC 2013. There will also be a cast Q+A panel, answering fan submitted questions. The hour long slot runs from 13:35-14:35 PDT, and is shared with another of Lionsgate's upcoming movies 'I Frankenstein'.

Isn't this exciting? Let us know what you think!
Posted by Admin on Monday, July 15, 2013 0 comments