Posted by Admin on Saturday, August 17, 2013
Marking the start of Lionsgate's "100 Day Countdown to Catching Fire", some premiere locations and dates for the film have been announced...

The world premiere for Catching Fire is set to take place on November 11th.. in LONDON! This is incredible news, and very well received by us UK tributes! Will you be attending?

"With 100 days and counting until the November 22 worldwide launch of The Hunger Games: Catching Fire, the second installment of Lionsgate's (NYSE: LGF) global blockbuster Hunger Games franchise, the Company announced today that it will host a Catching Fire world premiere in London on November 11." (read the full press release here.)

In addition to the UK world premiere, two additional premieres for Catching Fire were also announced; November 12th in Berlin, and November 15th in Paris! 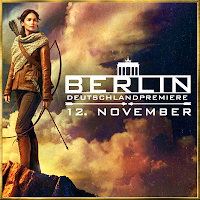 These details come from the official German and French HG Facebook pages. Through these, we have also learned some extra details: