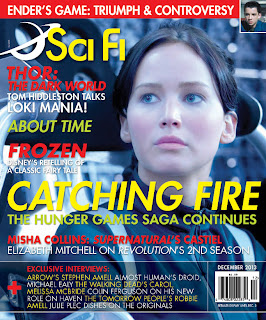 UPDATE: Head over to Tara Bennett's (the article author) blog and The Hob for additional quotes from the article.

The full feature will be available in Sci Fi magazine's December 2013 issue, arriving on US newsstands, and everywhere online this week. Go and grab a copy!

Walking into a breathtaking suite in the Casa del Mar, where director Francis Lawrence awaits, the press machine is officially kicking into high gear for his first installment of The Hunger Games films, Catching Fire.

In the sequel, Katniss Everdeen (Jennifer Lawrence) and Peeta Mellark (Josh Hutcherson) are back in District 12 after winning hte Hunger Games, estranged, dealing with PTSD and the ripple of dissension they created with their unorthodox win over the Capitol and President Snow (Donald Sutherland). As they embark on a Victory Tour, the spark of rebellion will rise around them and ultimately thrust them both back into the Games with other former winners as punishment.

"I really connect with the overarching ideas of the entire series and the idea of the consequences of war: what it means to the world, how it changes people, the loss involved and the consequence of it all." (Francis Lawrence)


Check out more below (after the jump):

"I had never planned on doing a sequel to anything where there is an established world, but part of what I saw in Catching Fire was a large opportunity to create and not just have to go back," he admits. "This story for me is where everything starts to take off. The characters are very different because they are changed by the games. The world is very different. It's winter in District 12 and we see different parts of it like the Victor's Village. We also go to districts we haven't been to before. The Arena is completely different. I thought there was an opportunity to humanize Effie (Elizabeth Banks) and Haymitch (Woody Harrelson), as well as the opportunity to add new cast."

"So there was plenty of opportunity for world building, which is something I like to do, but I loved where the story went. I love that the stakes were ratcheted up for the world and I liked where the love triangle started to go"

"In Catching Fire, the emotional core of the film revolves around Katniss transitioning from just being a single-minded survivalist as she tries to sort out her attachments to both long-time friend, Gale Hawthorne (Liam Hemsworth) and Peeta." Lawrence explains, “we see what each of the boys represents for her:  the eloquence and peace of Peeta and the rebellion and fight in Gale. How they weigh with Katniss is getting set up here and is so important for the next movie."

"I was also really interested in the idea of the awkwardness of Katniss and Peeta in the beginning. Six months have gone by and we see, “wow, they’ve gotten really disconnected.” I really like that and Katniss’ reconnection with Gale, then sort of being forced back together with Peeta. But again to connect to the consequences of war, I love the idea that two people, who have mostly bonded over a shared traumatic experience, are now getting sent back to the Games. Even though they were falling apart, they go back into this world and start to bond again over this shared trauma. I'm really pleased with it.  I also think we did some great work on Peeta’s character with Suzanne in helping reconnect them. There’s a scene on the train  early on when they are on the way to District 11 that I think works really well in re-establishing the connection between them.”

Asked about his favorite scenes to shoot, Lawrence mulls it over and says there are too many. “There are scenes I was excited about like the shooting in District 11, Mags' (Lynn Cohen) sacrifice, and some great sequences between Gale, Peeta, and Katniss right around the whipping.”

On 'Mockingjay' being split into 2 films:


“I think they are two distinct stories. I think the objectives are very distinct. One is about getting Peeta back and one is about revenge, which is why I think they easily separate out. It allows us to explore what we need to explore within each of those stories instead of jamming them both into one.”


"The hardest part for me was shooting in Atlanta, because I was still discovering Johanna and I had a hard time breaking out of her on set. I felt like I was more of a loner, not going out and hanging out with everyone because I just wanted to get her right. I feel like once we got to Hawaii, I knew who she was and could let my shoulders down a bit and realize I'm on a beautiful location and I started hanging out with the cast and crew more. They were like, "Oh Jena, you're normal and not a crazy person like Johanna," Locations helped to put me at ease a little.

I think the relationship between Finnick and Johanna is so important that any little moment we have together we went for it because they are sole survivors. They've grown up together and I think they've bonded because of that. I think it's one of the last beautiful relationships in Johanna's life where it's someone she can actually rely on.

There's a scene with Stanley Tucci (Caesar Flickerman) that I was a little bit nervous about because I hadn't seen him before, as he was in makeup so we didn't get to talk, but we had worked together before. I literally got up on stage and said, "Hey Stanley, it's nice to see you again," and we started the scene where I basically have to vomit my crazy aggression all over him. Afterward, as he's wiping the spit from his eye, he was like, "Thank you, Jena. That was actually great," so I was like, "Yes!"

We haven't quite managed to see everything from the feature yet, so stay tuned for more!

Thanks to hawthornhedge and readingperks.
Posted by Admin on Sunday, October 13, 2013 0 comments