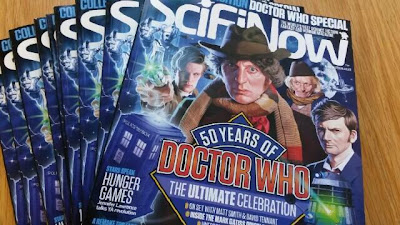 We found out earlier this month that the UK magazine SciFiNow would be having an exclusive Catching Fire feature including interviews with the cast and director.

Now, the latest issue (#86) has arrived on newsstands in London (available nationally next week), and thanks to ThePeacekeeper and THGAustralia, you can check out these quotes! :


"When I first signed on to it, I expected to have a lot of regrets," admits the 23-year-old on her decision to break out of independent movies for a big studio spectacular. "But fortunately I haven't. I am happy I did take the role. [If I hadn't] I would still probably be able to go to restaurants without becoming a nervous wreck or go to Starbucks and get my own coffee - that would be different. That would be lovely."

"Originally it was just reading scripts, talking to directors and making movies," she recalls, "and then all of a sudden it was like, 'Oh yeah, you have to wear high heels and make people like you.' So when I read the book, I was laughing at that, going 'Yeah, I know how that feels.'"

"The wedding dress was incredible because it's stunning, but I'm not good with big dresses - and stairs. I'm so bad"..

On Katniss in Catching Fire:


"She's suffering from post-traumatic stress from the first Games, and she's trying to get her life back. She is living in the Victors' Village now, she doesn't have to hunt any more - which makes her feel useless and bored - and there is part of her life that Gale will never understand. Peeta is the only one that truly knows what she went through. And when she has to go back to the Capitol, it's not a foreign world to her anymore. Not that she likes it, but she understands it now and how to work it."

On being a role model to young girls:


"In the first movie, when it was obviously being talked about, like, 'It's The Hunger Games, you have to lose ten pounds.' I said 'We have control over this role model. Why would we make her something unobtainable and thin?' This is a person that young girls will be looking up to, so why not make her strong? Why not make her beautiful and healthy and fit? I was very adamant about that, because I think that our industry doesn't take enough responsibility for what it does to our society. I remember what it felt like to be 14 years old, looking at a Victoria's Secret model and thinking, 'I'll never look like that.' I don't want to make someone feel like that."


Check out words from director Francis Lawrence and a Q+A with Josh Hutcherson after the jump:


"It started as a survival story about a girl who makes a sacrifice for her sister, but it becomes a much more political story," he says. "The other districts are starting to fight back. The things that she has been asked to do have much greater stakes. It is no longer just her and her family; it has to do with the entire country."

"The arena itself becomes one of the bigger threats in the film," he reveals. "There is a big fight with the monkeys, and there's poisonous fog where they have to run down steep jungle hillsides. Filming in Hawaii was pretty tough, because when you're shooting in the jungle the days are short [and] it's raining a lot, so it's very muddy and there are a lot of mosquitos. Mixed with IMAX and a lot of action, and people were slipping and getting hurt. That was tricky."

"The next chapter really opens the world up in a whole different way," he explains, "with the characters, the narrative and the mythology, but at its core are the consequences of war. That was what was really interesting to me: the idea that people are damaged by trauma and there is real loss. There's a grey zone and it is not always clear who the good guys and bad guys are. I worked hard to bring a humanity to the film; Jen [Lawrence] already brings a lot of that with her and the boys, but I think you guys will all see a different side of people like Effie and Haymitch now. I'm really pleased with how emotional the movie is, I think it is really powerful and it truly is about the characters, even with all the spectacle of the arena."

"Josh and Jen are like brother and sister; they love each other to death, but they bicker and play around a lot. Liam is the quiet one of the three - softer spoken - but I think that his performance is going to surprise people in this. He did a fantastic job in taking on the role he needs to take on for the rest of these stories. He's not in as much of this film, but he will be in a lot more of Mockingjay."

On Sam Claflin as Finnick:


"Sam was one of the first people to come in to read, and I thought he did a fantastic job;" he says. "He is a very handsome, charismatic guy and really athletic, so I thought that he fit the physical aspect of Finnick, and he can be quite charming and fun, which is one of the things that we need to see early on. But he is actually an emotional guy, and it's that warmth that really locked me into him, because if you look at his character throughout all the books, 95 per cent of it is the attachment to the person that he loves and the trauma that he is going through, not the charming rogue that he presents himself to be at the beginning of Catching Fire."


"She did loads of great stuff [in this movie]" he tells us. "There are really amazing dresses that Effie [Elizabeth Banks] wears, and she got some Alexander McQueen museum pieces, and designed some amazing things for Katniss to wear for the chariots and interviews."


How would you describe Peeta in the second film?

At the beginning he's cold with Katniss. It's weird to be in love with somebody and them not be in love with you. As Peeta goes along the tour, he starts to feel angry about just how messed up it really is and how Katniss is right: this is so effed up to have to go round to the Districts and meet the families of the people that they just killed. When he gets put back into the Hunger Games, he has such a fire inside of him that there are a few times in this movie where I get to be more physical.

Would Katniss be the kind of woman you would fall in love with?

What was the most fun moment on set?

When we shot the scene where I had to propose to Katniss where I get down on one knee, the very first time I did it I got down on one knee and my pants ripped right underneath. That was a fun moment because we tried to keep the scene going, but all the while Stanley Tucci [who plays Hunger Games host Caesar Flickerman] and Jennifer are sitting there. I'm just like smiling, knowing it's ripped right in the middle, so we were kind of just laughing and we had to eventually stop. It was pretty funny but a little embarassing. It's not a good omen, the first time I try to propose to a girl I rip my pants! I'm doomed, I'm absolutely doomed.


What kind of challenges did you come up against?

The physical challenge proved quite difficult. Having read the books and being totally aware of what a lot of fans' reactions were to my casting, it spurred me on to want to work harder and achieve the goal of basically becoming a sex god. Whether or not I got there is not for me to decide, but all I can say is that I tried my damnedest.

Aside from hitting the gym, how else did you prepare for this role?

You have to be aware of what is coming up, especially with Finnick, where the journey that he goes on in the third book is quite drastic. I had to familiarise myself with that story to have those elements and insecurities within the second film, so when the moments come when he is pushed to the edge, you know why he is being pushed at that particular moment, and why Annie Cresta [Finnick's girlfriend, who will be played by Stef Dawson in Mockingay] means that much to him.

[At first, Francis Lawrence] was like, "Can you just try him a little more vulnerable?" I was like, "No, he's not vulnerable; he's arrogant, he's confident." I had a very two-dimensional outlook on Finnick's life. But what is great about not only Finnick's character, but all the characters, is that they are so three-dimensional; they all have their complexities.

Without revealing any spoilers, can you tell us more about the direction of Catching Fire?

I think what this story is about is fighting for what you think and believe in. Katniss believes that, and all the victors know that them getting dragged into the arena is wrong. They thought they'd be done with that, they should should be free - they know they have been cheated. When Katniss comes into his life, he is able to go, 'You know what? You are the inspiration to all of us, you are the symbol of rebellion, the symbol of standing up for yourself,' and hopefully that will bring that out in everyone.