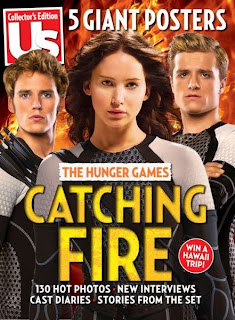 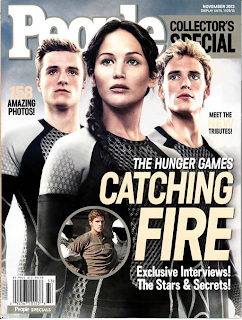 Like they did for The Hunger Games last year, Us Weekly and People are releasing special edition issues of their magazine dedicated to Catching Fire!

These magazines are typically jam-packed with awesome new pictures, interviews and details.

Us Weekly are advertising 5 giant posters, 130 hot photos, new interviews, cast diaries and stories from the set. They are also hosting a sweepstakes to win a trip to the Catching Fire set location in Oahu, Hawaii! Click here for more details on how to enter. (link currently inactive).

"From the Editors of Us Weekly comes the highly anticipated Hunger Games: Catching Fire Special Edition. This Collector's Edition features 130 hot photos, stories from the set, plus, new interviews and 5 HUGE posters."

Pre-order this one from Barnes & Noble.


People are promising 158 amazing photos, exclusive interviews with the stars and their secrets.

Both magazines appear to be retailing at $10 each.

Check out these sneak quotes from interviews with the cast from Us Weekly:

"The hardest stunt for me is probably still just basic running. If there's a scene where I'm running up a mountain, I've been running up that mountain all day, and I'm just trying not to hit myself in the face with my bow." (Jennifer Lawrence)


“They start out in a cold place, as they don’t know how to act, living in Victor’s Village. But in the Games, the ice breaks. There’s a great moment on the beach when Katniss tells Peeta she needs him and can’t live without him. Katniss doesn’t often open up like that! I think the fact that he brings that out is why he’s so special to her.” (Josh Hutcherson)


"It's very rare when you genuinely feel you've made friends on a film. I was worried about entering this tight knit family, but they were all so welcoming."

"The number of times I hit my head with my trident was ridiculous. But I slowly got better by practising in my hotel room - wielding a broomstick. [Laughs.] I must have looked mad." (Sam Claflin)


"It only took me 20 minutes to learn how to make fishhooks. I can't say I'm a master, but they were good enough for the film!" (Lyn Cohen)


"Cinna's death scene happened to be the last scene I filmed. It was tough. I got knocked down and dragged for, like, three hours straight. I couldn't even move the next day!" (Lenny Kravitz)


"If Jen, Josh and Woody were in the same scene, it was almost always a disaster. [Laughs.] I had to kick them off set a few times when they'd hang around, throwing stuff at each other while we tried to change the lights!" (Francis Lawrence)