Home » » Costumes From 'The Hunger Games' to be Auctioned By Blacksparrow

Costumes From 'The Hunger Games' to be Auctioned By Blacksparrow

Blacksparrow Auctions are auctioning off all of the costumes used in The Hunger Games! The auction is set to be held in Los Angeles on November 16th. 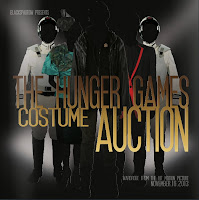 Those of you near LA can head down to the venue to view some of the costumes in person, or you can check out this amazing and insightful catalogue of all the costumes to be sold here.


Over 200 original screen-worn costumes from the hit blockbuster, The Hunger Games, with be on the auction block on November 16, 2013. Interested bidders can participate in person, by telephone, absentee and Internet.Included in the auction will be costumes worn by Jennifer Lawrence as “Katniss,” Josh Hutcherson as “Peeta,” Elizabeth Banks as “Effie,” Stanley Tucci as “Caesar,” Liam Hemsworth as “Gale,” Woody Harrelson as “Haymitch,” Lenny Kravtiz as “Cinna,” Donald Sutherland as “President Snow,” Wes Bentley as “Seneca,” and many, many more.

A hardcopy of the catalogue is available for purchase here.

Bidding will also take place over the phone and online. Starting prices range from $100, and rise as far as $10,000 (for Katniss' 'Girl On Fire' interview dress). For whole costumes this is extremely reasonable. You could own a piece of Hunger Games history!

Also included in the catalogue are some Catching Fire related items (click to enlarge): 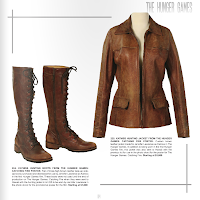 Katniss' brown leather items as worn in this poster and used in Catching Fire.

"Because this pair of boots fit Jennifer Lawrence best they were the pair chosen to be used again in The Hunger Games: Catching Fire" 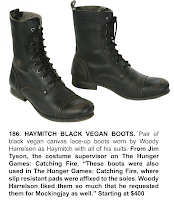 Woody Harrelson liked his vegan boots so much, he asked for them to be used in Catching Fire
and Mockingjay too! Those "slip resistant pads" must have been good in avoiding icy slips..

Every costume you can think of from The Hunger Games movie is available, so why not pick your favourite(s) and place a bid. You never know...

Thanks to The Hob for the tip!