Posted by Admin on Monday, October 07, 2013
Check out these most recent quotes from Francis, Willow, Jennifer and Sam below:

Does Jennifer Lawrence still do the karate-running? She hated how she looked running before.
She said she always made this stupid face when she ran, and I had to specifically watch out to make sure she didn’t. So I was always checking. I would tell her, “You made the stupid face!”

Will you be using the shaky cam, like in the first movie?
No! [Laughs.] No shaky cam. I think a lot of people will be happy to hear that.

The first film skimped a little on showing us the strategy behind the Katniss-Peeta love story.
I felt the same. I felt the love story in general was, um, a bit buried in the first one. I wanted to bring the love story to the surface. And when I say love story, I mean the triangle.

Will this one have better CGI?
Uh, yeah. I think the effects are phenomenal. If you know the book, there’s a monkey-mutt attack, and Weta, who did Rise of the Planet of the Apes and King Kong, did the monkeys for us.

Is Peeta [Josh Hutcherson] still going to be the shortest person onscreen?
[Laughs.] No. No, he’s not.

It’s fine, actors can step on boxes.
[Laughs.] He and Jen get much closer in height when she’s in flats, which is a good thing. You throw her in some heels, and it’s all over.


See below for a scans from the November 2013 issue of Teen Vogue magazine, featuring quotes from Willow, Jennifer and Sam (click to enlarge): 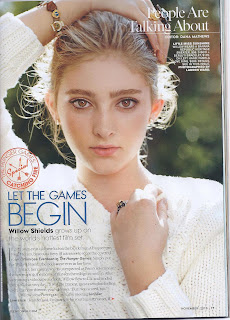 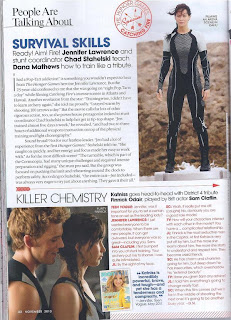