Posted by Admin on Tuesday, October 01, 2013
Check out these recent interviews with new details from the cast members of Catching Fire!

Seventeen.com has exclusive quotes from Josh Hutcherson, Lenny Kravitz, Willow Shields, Alan Ritchson and Stephanie Leigh-Schlund. Check out a selection below, and click here to read their full slideshow. 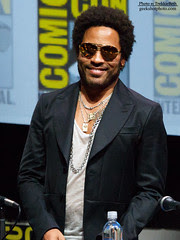 
"We had this funny game we used to play on set. I don't even know how it started! Basically, somebody would make the 'OK' sign with their hand and would hold it down real low, and if somebody saw it, they stuck their finger in it. It sounds ridiculous, but it went on the entire shoot!

I kept one thing from the set. There's a leather jacket that Cinna wore in some scenes, and I had to have it. I made sure that it went with me."


"It took 20 minutes [to do my face makeup] on days where I had a bad breakout—which happened a lot on set! Covering up my tattoos adds another hour and a half.

I don't have a good luck charm I bring on set, but I did bring my speaker set! I brought my portable wireless speaker set because I have to have music everywhere."


"We did a lot of martial arts training. There's a lot of choreography where I'm spinning around and whipping these [knives] and rolling around. It was taxing, but it was a lot of fun!

The Cornucopia scene took us weeks and weeks to shoot. It's kind of funny because what could be just five seconds on-screen in the movie probably took us a week and a half to film. For me, it's a month of memories, but some of the segments are going to go by so fast!"


Josh Hutcherson also gave another interview with Glamour. (click the link to read the full article)


Jennifer [Lawrence] and I were nervous about our new costars because we’re kind of crazy when we’re together, so it can be a little scary for the new people. But everybody jumped right in. It was a fun vibe on set.