Posted by Admin on Friday, October 25, 2013
More updates from the Catching Fire soundtrack!

Thanks to an exclusive reveal by EW, you can now check out this 90 second preview of the studio version of "Gale Song" by The Lumineers:

We previously posted this YouTube video of the complete song being performed live. It's nice to hear what the studio version sounds like. (albeit only a sneak listen!)

ABBY also posted their bonus song on the German and Austrian releases of the soundtrack album. Listen to it in full below:

Sia has posed in a photoshoot for the cover of Billboard magazine, and spoke briefly about "Elastic Heart": 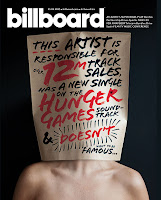 Obviously there weren't any surprises when her tracks were sent in for consideration for the films "The Great Gatsby" and "The Hunger Games: Catching Fire." Once she knew she would be the artist recording "Elastic Heart" for the latter's soundtrack, Sia says she felt there was a shift in the direction her RCA album could take. She's not planning to target the pop charts—she's created an animation project, Greta Gorgeous, and her band Surprise Party with that in mind. Her goal is something more stylistically and lyrically fearless.

"I don't care about commercial success," she says. "I get to do what I love and communicate whatever I want."