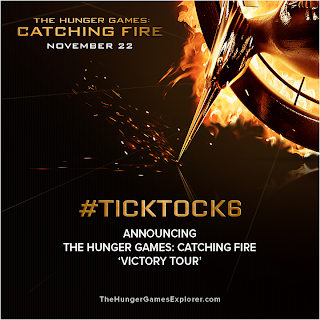 In celebration of the halfway mark in their "Tick Tock" countdown, Lionsgate have announced a National Victory Tour for the Catching Fire cast! (November 3rd - 6th.)

The tour (in partnership with COVERGIRL) will include stops at these locations in the USA:


The cast will be participating in special fan Q+As, signings and more..

For worldwide Tributes, November 6th will see members of the cast interacting through Twitter, Facebook, Tumblr, Google+ and Yahoo. 6 lucky fans will be chosen for a special Google+ hangout! Enter HERE.

Lionsgate are also increasing their focus on their partnership with world hunger charities Feeding America and the World Food Programme. Fans are encouraged to donate canned food at each event, and following the hashtag #IgniteTheFight. Check back at hungergames.com on October 28th for more details...
Posted by Admin on Thursday, October 17, 2013 0 comments