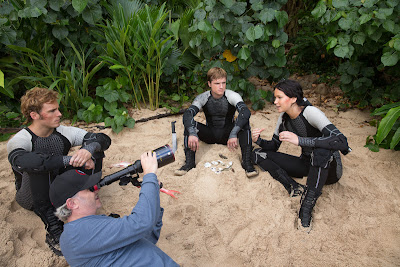 After his fantastic work on Catching Fire, we know everyone wants to hear what director Francis Lawrence has to say. Luckily, a multitude of interviews with the man himself have been posted online, discussing Catching Fire, and also Mockingjay, which is currently in production.

Check out quotes from the most recent interviews with Francis below. Click the links to read the full articles from the respective websites (beware of some minor spoilers):

Talking to Empire on the ending of Catching Fire and staying close to the book:


"The ending comes from the book, of course, but the big difference with the very last scene is really the nuance in Jen’s performance. I think that was something that she and I worked on and saw something happen on the day, and that changed the way I shot it a little bit. Other than that, the dialogue comes straight from the book."

"I remember specifically that even when we had some different dialogue, and there was a different interpretation of the scene, we just said, ‘You know what? Let’s do what’s in the book.’ And we word-for-word picked the dialogue out of the book, so it’s all pretty close. The book does take a little more time getting to that last scene, though. We didn’t want to do that, but we went for the book ending."


“This happens often in scripts,” said Lawrence. “That interview sequence was basically done as a montage. The original script had these one-line little things that felt like they were in the middle of an interview. So I went to Suzanne Collins and said, ‘Suzanne, I think you and I have to create a little addendum. Because actors can’t just do one line that’s in the middle of an interview. What we have to do is create a full section of an interview, so there needs to be a real question from Caesar Flickerman, and a full answer from each of these tributes, that sort of matches their point of view against the Capitol, but also shares a little facet of character.’ And it was actually Suzanne’s idea — or she and I together, actually — to give Johanna this ‘f*** you punk’ attitude.”


Interview with Huffington Post about starting work on Mockingjay:


"Well, I think it’s all approach. I think, quite honestly, for me, the third book is the book that gives the stories their meaning — and that’s what I’m most excited about. To be able to take these stories to its finish, but also to be able to tell the story that sort of gives them all their kind of greater meaning, is really important to me. But, we all hear that kind of stuff, so I’m very mindful of it. And what I can try to do that we did with 'Catching Fire' is make it as rich and emotional an experience as possible. So, if we can continue to keep the story in sort of Katniss’ point of view and keep you emotionally engaged with her and make the story as compelling as possible and give each of the characters that we present as emotional a story as possible, I think that we’ll really keep people engaged in the world of 'The Hunger Games'.”


Talking with WIRED about the adapting Mockingjay to the screen:


“It’s a weird thing,” Lawrence told WIRED just before he flew out to Europe to continue location scouting for the final two films. “Somehow I didn’t feel nearly as much pressure starting Catching Fire as I do doing these Mockingjays… For me, [this] is the chapter that gives the entire series its meaning.”

“The ending of the book and the book itself is just really important to me,” he said. “I will just say that we’re making the book. But because we are splitting it into two there’s room for world growth. I don’t want to give anything away or anything, but we’re being very true to the book.”

"We’re actually shooting Mockingjay digitally,” Lawrence said. “We went from film to digital – mostly because it’s a very different kind of story and most of it takes place underground and in District 13.”


"The only thing that was a little intimidating about taking on the Mockingjays, and I’m in the middle of it now, was accepting the lengthy shoot. It’s a long time away from home and that was a tricky thing to work out in terms of family, but to know that I’m seeing these stories out, that I’m going to get to do the book that I think, personally, gives the whole meaning to the series, is very exciting."


Watch video interviews below after the jump:

Francis is also featured in the Mockingjay cast discussion video from Digital Spy:

Click for more interviews from: Fast Company and 3News.
Posted by Admin on Tuesday, November 26, 2013 0 comments