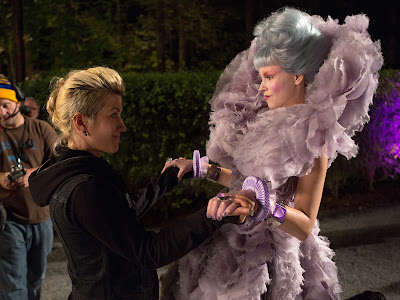 Trish Summerville (Catching Fire costume designer) recently spoke about her work on the film with MTV and Teen.com.

On working with Jennifer Lawrence:


"She’s fantastic. I just feel really fortunate to have had the actors that I've had on this film because she’s so down to earth and so lovely and so hard-working and just effortless. She’s just really brilliant at what she does and she’s a joy to have on set. With her and Josh and this kind of chemistry that they have together and this friendship that they've developed, they interact so well with the crew and all of the other actors. They’re just really easygoing; really easygoing."

On the arena wetsuits:


"The arena suits are made out of spandex and a kind of a microfiber; they have a three-dimensional printing on them. They’re basically modular, so they can be removed in different pieces. One of the things I was trying to keep in mind was the function and the fashion of it all because they’re in those costumes for a really, really long period of time. We had to have various stages of the costumes. I incorporated really interesting looking elbow pads and knee pads because we would have to give those to the actors anyway for a lot of the stunts that they do. So instead of having these really body-conscious suits and trying to shove pads underneath and disguise that, I decided to do them externally, so that they were really functional and worked for the kids and the actors and what they had to do, but that also looked really appealing."

On her favourite costume from Catching Fire:


"I'm saying a different one [each time]. There are so many that I love. One of the ones that I haven't mentioned so far that I love is Josh's interview costume, and it's the one that's supposed to be his wedding tuxedo mirrored to Katniss' wedding dress. It's by a designer named Juunj. It's a Korean designer, and I love it because I love the architecturalness of the jacket. It's three-dimensional, the lapel. So the way it reads, part of it juts out. And then he has a metal-stand collar. That's like a tuxedo collar inside of his shirt, and then he has a metal pocket square. So it's like really high-gloss metal. It's this hardness and softness of Peeta, which I think we start to see in his transition of his character. He mans it up in this one. He's tougher. He's fighting for Katniss and his life and his family, so I like the softness of the white that he has with these metal aspects."


Click to read the full articles from Teen and MTV. Lots of great insights!
Posted by Admin on Monday, November 04, 2013 0 comments