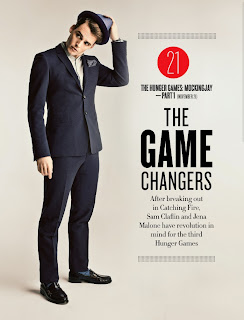 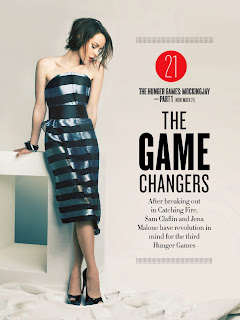 While we're waiting for the promotional campaign for Mockingjay to officially kick-off, Empire Magazine have brief interviews with Sam Claflin and Jena Malone in their February issue.

Read the quotes below:


"Every time I see Francis I’m convinced he’s not going to know who I am… I mean, I’m not the Finnick in the book. I’ve got brown hair, a beard, I’m a bit overweight, not 24 and I’m not seven foot… I was fully ready for the fans to hate me!"

As for what Finnick in Mockingjay, Sam explains that there will be less nudity and more neurosis for his character:

"I’m honestly so scared about saying anything at all, even though, as you say, the books are out there. But you see more of Finnick. No, not like THAT. More of his reasons for being how he is. Oh, you know what I mean!"


“I remember going into the audition just being annoyed about everything,” Malone says. “Only because that’s who Johanna is. So I was annoyed by the receptionist, the person next to me in the elevator, the room. I think Francis was a little frightened….”

“I think it’s really interesting how she develops. It would be really boring if she was just this really bitchy person, but that’s not who she is. She’s pretty much an animal who’s adapted, because she has to. Bitchiness is just a surface thing, but you start to see what’s underneath.”