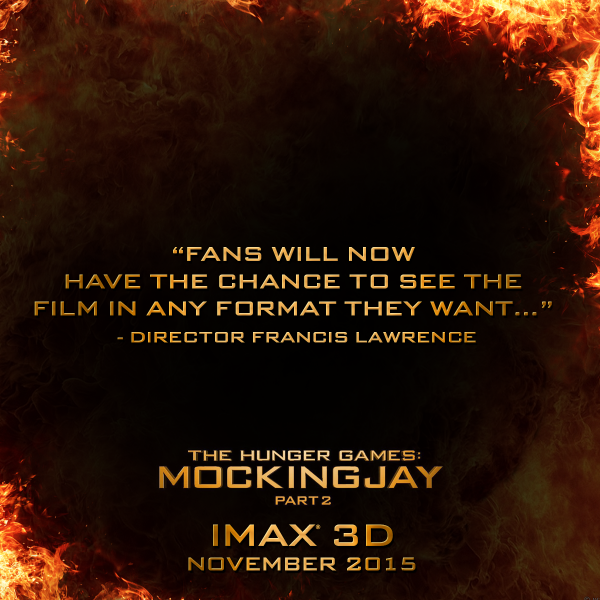 During today's earnings call, Lionsgate announced that Mockingjay - Part 2 will be released in IMAX 3D, as well as regular 3D and 2D, in theaters worldwide this November. From the official press release:

"I'm thrilled Mockingjay – Part 2 will be in IMAX theaters," said director Francis Lawrence. "Fans will now have the chance to see the film in any format they want, which is exciting; we recently saw the 3-D version of Mockingjay – Part 1 before its release in China, and the new level of immersion was really fantastic."

"It's exciting to be back in The Hunger Games world and once again team up with our partners at Lionsgate, director Francis Lawrencea nd producers Nina Jacobson and Jon Kilik on what we believe will be a thrilling, action-packed finale to this blockbuster franchise," said Greg Foster, Senior Executive Vice President, IMAX Corp. and CEO of IMAX Entertainment. "The fan enthusiasm and cultural impact that this series has generated has been truly remarkable and we are thrilled to offer audiences the opportunity to experience the last chapter in IMAX 3D."


Lionsgate CEO Jon Feltheimer confirmed during the call that the film will release theatrically in 'all formats' - 2D, 3D and IMAX 3D - in all territories worldwide the week of November 20. RealD 3D also put out a press release announcing the global regular 3D rollout for the film.

Check out the first official synopsis for the film below:

With the nation of Panem in a full scale war, Katniss confronts President Snow (Donald Sutherland) in the final showdown. Teamed with a group of her closest friends – including Gale (Liam Hemsworth), Finnick (Sam Claflin), and Peeta (Josh Hutcherson) – Katniss goes off on a mission with the unit from District 13 as they risk their lives to stage an assassination attempt on President Snow who has become increasingly obsessed with destroying her.  The mortal traps, enemies, and moral choices that await Katniss will challenge her more than any arena she faced in The Hunger Games.


Stay tuned for more as it comes in.