Home » » Lionsgate to Present At CineEurope on June 25 - Will There Be 'Mockingjay - Part 2' Footage?

Lionsgate to Present At CineEurope on June 25 - Will There Be 'Mockingjay - Part 2' Footage?

While Lionsgate did skip out presenting at the Las Vegas-based CinemaCon this year in favour of a party to celebrate Francis Lawrence's 'Director of the Year' Win, they will be showing off their upcoming slate to European theatre owners at CineEurope in Barcelona next month on June 25.

This looks to be the first time Lionsgate will be presenting at the convention (previously they screened RED 2  in 2013 and they skipped out the 2014 event) and studios have brought lots of exclusive footage to show attendees, from Sony with 4 minutes of the mega-successful James Bond adventure Skyfall in 2012, to Disney bringing out exclusive Guardians of the Galaxy and Avengers: Age of Ultron trailers and behind-the-scenes peeks just last year, and it won't be at all a surprise if Lionsgate bring out (along with the rest of their slate ranging from Cannes triumph Sicario to 2016's Gods of Egypt and Now You See Me 2) footage from Mockingjay - Part 2 to wow the attendees. 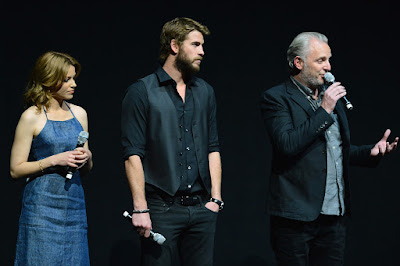 
What does this mean for us: we won't be surprised if what Lionsgate will premiere from Part 2 to the CineEurope audience is the film's first trailer, before releasing it in theatres and online at a later date - much like they did with the first Ender's Game trailer at CinemaCon 2013 where Francis and co showed the then-released Catching Fire teaser trailer. That being said, it's also likely what they'll show will be some exclusive scenes that won't be seen anywhere else. And finally, very often directors and cast members come to the event to present the film - so will this be a chance to see Francis and members of our cast together? We can only hope this also is a sign of things to come for the fans soon too!

Stay tuned as we hear more about this.

(source: CineEurope)
Posted by antovolk on Wednesday, May 27, 2015 0 comments