While we wait for the actual movie promotion for Mockingjay - Part 2 to kick off, Lionsgate have released another beautiful unseen image from CMO Tim Palen's upcoming photo collection book Photographs from The Hunger Games.

This new image is a glamorous look at Elizabeth Banks' Effie in her District 13 outfit from Mockingjay - Part 1 and was revealed exclusively by EW earlier today. See the full image below: 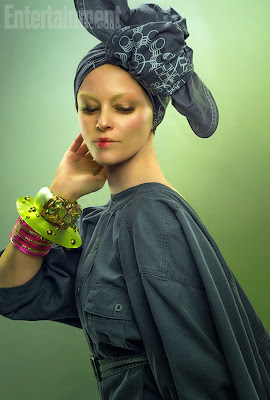 Photographs from The Hunger Games, featuring 200 of Tim Palen's promotional photographs and key art, used in the franchise's marketing campaigns and some never-before-seen, will be released exclusively through assouline.com on June 29, followed by a wide release across book retailers and Amazon on July 29. The book is released in Europe and the UK through Amazon and other retailers on July 28.