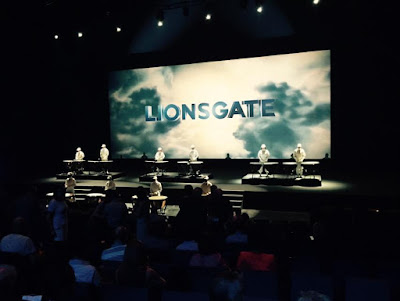 UPDATE: Russian industry portal KinoMetro who attended the presentation confirmed today that a brand new propo viral video was presented alongside the new trailer, as well as confirming once again that the new trailer will land online in a month's time. We're expecting the same reel of the new propo and trailer to be shown at SDCC on July 9, and hopefully the propo will make its way online too.

We expected Lionsgate to debut something from Mockingjay - Part 2 during today's presentation at CineEurope in Barcelona, but we never expected it to be this.

THR reports that Jennifer Lawrence, via satellite link, introduced new footage from the film to attendees, an image of Katniss in a 'new red outfit', and, in a surprising move, the second trailer, which according to THR is 'due out in a month'.

Live booming kettle drums heralded the start of Lionsgate’s presentation on the last day of the CineEurope trade show on Thursday, providing the opening fanfare for the finale of the mini major’s biggest asset.


There has been no information whether this second trailer is the film's full theatrical trailer, or a second teaser trailer - either way, it's expected to be shown during Lionsgate's panel at San Diego Comic-Con on July 9, with an online debut, if THR is to go by, before the end of that month ( in theatres likely with Mission: Impossible - Rogue Nation). We won't be surprised if the other CineEurope footage is also shown exclusively to SDCC attendees - and we hope the image of Katniss in a red suit (which we may have seen before in a since-taken-down video from Funny or Die in April) makes its way to us soon...

We are extremely excited for this, so stay tuned as we hear more!