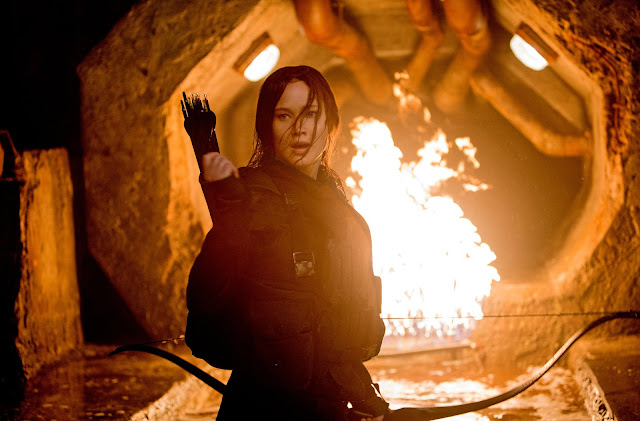 The New York Times has posted an exclusive interview with Jennifer Lawrence, and a new still featuring Jennifer as Katniss in Mockingjay - Part 2 has been revealed!

Check out highlights from the interview:

At this point, Katniss has been through the mill. She’s had to hunt children for sport against her will. She’s been bedeviled more than once by that godforsaken cat.
If Katniss was scared in the last movie, then she is almost numb in the next one. She’s been through so much.

How have you personally changed since the first “Hunger Games”?
I don’t feel like I’m being dragged by anything anymore. I feel more in control. I’m calmer. I know that there’s no point to feeling anxious all day, so I try not to. I’m still scared, but it’s about different things. Now, I worry about — [Trails off and shifts a bit uncomfortably on the sofa.] O.K., get ahold of yourself, Jennifer. This is not therapy.

What are you going to miss most about your “Hunger Games” experience? Your cast mates? I know you’re particularly close to Josh Hutcherson and Liam Hemsworth.
On the last day it was so emotional, and we kind of couldn’t let go of each other. We were kind of freaked out that something was ending. And then, a week later, we were hanging out at Liam’s house. We were like, “Oh, O.K., so now we can just be friends. After seeing that nothing really changed with the three of us — four, including Woody [Harrelson], but he lives in Hawaii, so it’s trickier — we were fine. I mean, this was yesterday: Woody texted me, and said he had a dream about me. And I was like, “Was I amazing?” And then Josh called me and told me he had a dream about Woody. And then my friend came over to my house and told me she had a sex dream about Liam. I didn’t dream about anyone, but there’s always tonight.