The guys over at Entertainment Weekly have revealed the cover of their latest magazine issue - an exclusive feature on all things Mockingjay - Part 2!

Featured in the magazine are fresh new interviews with cast and crew. We also expect to see some new stills included too - stay tuned as we'll be sure to update when the full article arrives.

"I was excited about the scene at the end of the movie when I shoot my arrow—I won’t give it away— because when I was doing my archery training at age 20, that was always the scene I pictured. Five years ago I used to look at a stack of hay and pretend that it was this moment, and now it is here." - Jennifer Lawrence

"For me it was the scene where Peeta had to freak out and lose his mind. I was more excited than nervous, but then right before we shot, I realized I hadn’t planned on what the hell I was going to do. And then they say “Action.” You’re like “Ah!” And you just kind of do it." - Josh Hutcherson 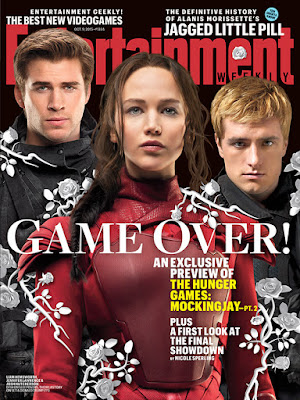 Part 2 opens with Katniss in a neck brace, recovering from Peeta’s Tracker-Jacker induced attack, and contemplating how she will enact her revenge on Snow. Meanwhile, under the watchful eye of President Coin (Julianne Moore), the rebels — including Gale Hawthorne (Hemsworth) — are making last preparations for their mission to topple the Capitol once and for all. It’s been a long run-up to the final battle, which finds the three leads, their camera crew and a few key allies engaged in warfare inside the booby-trapped hub of Panem. Returning director Francis Lawrence promises it won’t disappoint. “When you get to the end, you just feel the entire history of what these characters have been through,” he says. “It’s part of what makes this movie all the more satisfying.”

UPDATE: EW have released some new stills from the feature! 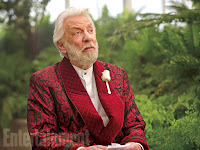 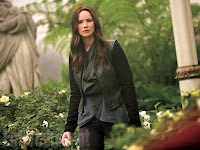 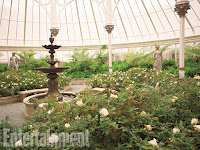 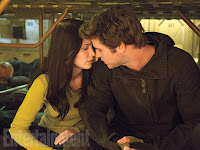 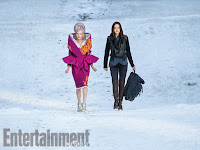 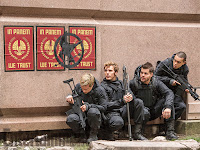 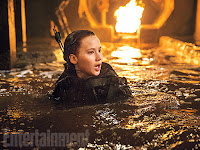 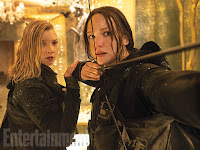 Look out for the magazine on newsstands tomorrow!