After a weekend preview in New York, The Hunger Games Virtual Reality Experience had its release on Samsung Gear VR today! The 6-minute tour takes fans on a very dream-like journey through the major settings and key moments of the 4 films...and you definitely have to experience it yourself to believe it.

Where the journey begins....in the woods outside District 12...

The experience itself is very much like a rollercoaster ride of sorts - you just sit back and look around the beautiful 3D scenery (VR Pill says the visuals in this are the best of any 360-degree 3D video yet- and we have to agree. Incredibly detailed work on all the settings.). One thing that, we do have to say, struck us was the 360-degree sound - the dialogue and sound effects would change direction when you look around, and that really added to the feeling of being there, with the characters. And despite the overall videogame-style look and the 'frozen in time' approach that was obviously done for time constraints of putting this together, the experience is still incredibly immersive and powerful. Kudos to Reel FX on their awesome work on this experience.

The journey begins in the woods of District 12 (we see Katniss and Gale hunting), before transitioning into the woods of the 74th Games - we see one of the sponsors' parachutes dropping, we see the tracker-jackers, Katniss and Rue. Clips from the films are shown on holographic displays integrated into the settings (such as the 'I Volunteer' moment and the cave scene). We then are taken to settings including Snow's (outdoor) rose garden, Ceasar's interview stage, the Quarter Quell arena, District 13's Command centre, the bunker (Buttercup makes a cameo), District 8, and then from Mockingjay - Part 2, an apartment in the Capitol (yes, Peeta is there) and then the centre of the Capitol itself... The scenes were very well chosen, and overall they do feel like an (almost) complete story - which should be especially nice for fans, as this experience delivers a great nostalgic throwback but from a new perspective. 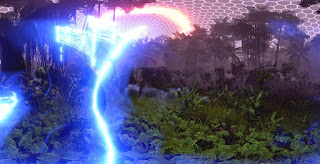 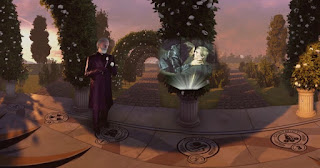 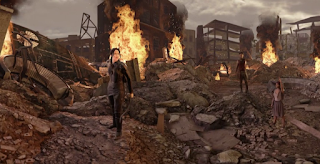 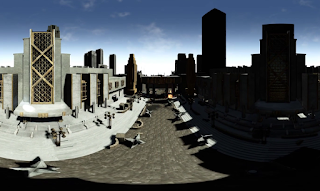 Neither the images nor the walkthrough video do the experience justice, so we recommend you check it out on the Gear VR if possible! The experience is available to download on Milk VR for Gear VR devices from today, and versions for Oculus Rift, Android (via Google Cardboard), and hopefully iOS, are being worked on, aiming to release by November 20. So if you're able to get to a Samsung store or Best Buy that has Gear VR demo units that you can try this out on....do so!
Posted by antovolk on Monday, October 12, 2015 0 comments