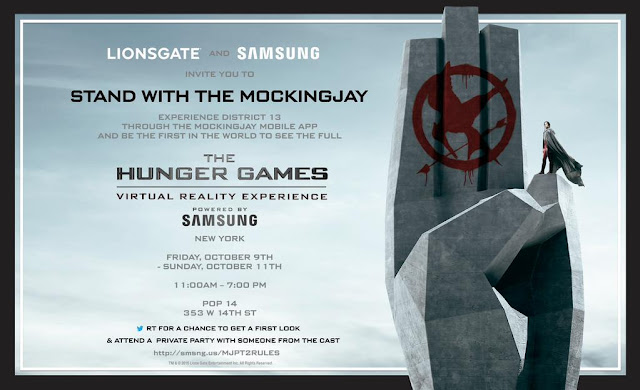 UPDATE: Samsung held the launch party for the full 6-minute VR experience tonight in New York, with Jena Malone attending! The experience is described as a "super short version of the whole THG story without the end end" - a sure to be emotional tour through key moments of the four films 'frozen in time'.

The VR Pill, who attended the launch event, confirmed with Reel FX (the studio behind the experience) that the experience will launch on the Samsung Gear VR on Monday (we hope to bring a deeper look at the experience then, when we download it), and a release on Android, iOS (using Google Cardboard) and the Oculus Rift by November 20.

Samsung and Lionsgate have announced today that the highly-anticipated The Hunger Games Virtual Reality Experience, a 1-minute preview of which debuted at Best Buy last weekend, will have its full public launch this weekend in New York. Fans will be able to try it out from 11am to 7pm at POP 14 on 353 W 14th Street! Samsung are also giving away 25 pairs of tickets to tomorrow night's launch party at the venue, with one of the cast members attending, so get RTing! (21+, closes 5pm ET TODAY)

District 13 awaits at 353 W14th. RT for a chance to see it first with someone from @TheHungerGames cast. #Sweepstakes pic.twitter.com/b3cmMeHHqB
— Samsung Mobile US (@SamsungMobileUS) October 7, 2015


For those not in New York, the experience, as we revealed last week, should be available to download for Samsung Gear VR from tomorrow. We hope to bring you a closer look at the experience tomorrow as well! It will be made available for iOS, Android and Oculus Rift soon, so stock up on your Google Cardboards....